The Burlington Police Department began a uniformed Bicycle Patrol Unit in the summer of 1997. The goal of the program was to localize police coverage and bring the department closer in touch with the community. The unit started out with three bicycle officers and four bicycles. Since then it has grown to a total of twenty officers.

The purpose of the bike patrol is to increase patrol coverage in areas where traditional vehicles cannot access. Bike officers on their mount easily maneuver parks, alleys, and shopping districts.

Some of the events the bicycle unit assisted in this past year were:

Officers were on bike patrol on Halloween to ensure public safety on the night of heavy pedestrian traffic and officer interacted with citizens.

All officers of the unit must attend and successfully complete a Mountain Bike Patrol School certified by the Massachusetts Criminal Justice Training Council known as Cops on Bikes With Education for Bicyclists (COBWEB). COBWEB is the original Massachusetts Police Mountain Bike Patrol Course designed to train the officer for his/her duties while on a Bike Patrol Unit. The Burlington Police Department has approximately 20 police officers trained and certified in police bicycle operations. While mostly a seasonal position, the bicycle patrols supplement the Patrol Division and have become a useful and beneficial addition to the Department.

All bicycle officers can perform most of the same duties that an officer in a cruiser would perform. In addition to answering calls for service, bicycle officers enforce traffic and pedestrian and bicycle laws as well. Bicycle officers also have been involved with providing bicycle safety classes and conducting a yearly bicycle rodeo.

Officers are easily distinguished from civilians as they are outfitted with special police uniforms. The uniforms are designed to allow better flexibility so that the officers are not limited in their abilities.

Comfort is of the utmost importance. For this reason, nylon stretch fabric shorts or pants are worn with a quick dry performance polo short-sleeved shirts. Emblazoned across the back of the shirt are the words BURLINGTON POLICE. A lightweight nylon gun belt is worn with all of its accessories.

Bikes are fitted with a dual beam halogen headlight, flashing lights to the front and rear and a carryall containing first aid supplies and other necessary equipment. 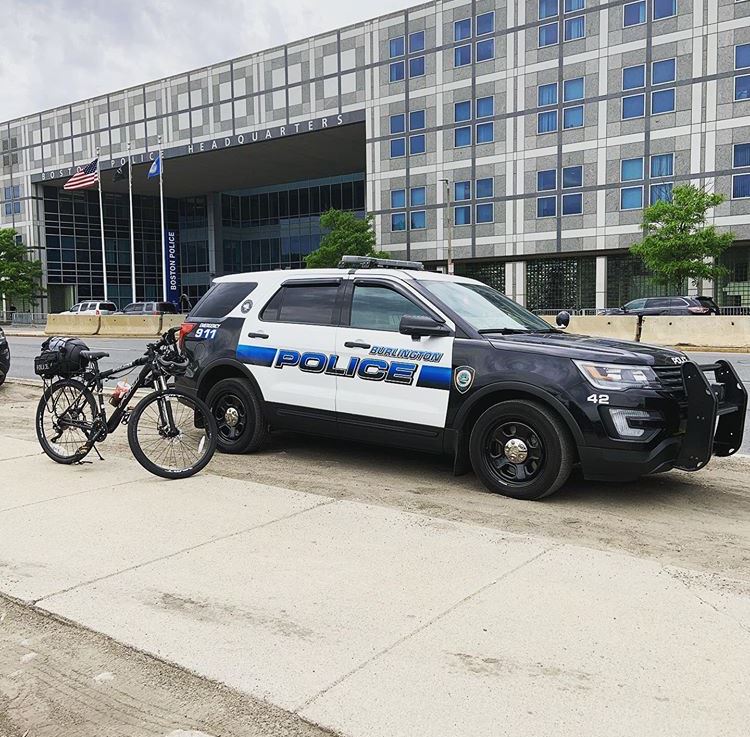 Notify Me
Trash and Recycling
Online Payments
Looking for
Permits
Have a Question?
Jobs
Government Websites by CivicPlus®
[]